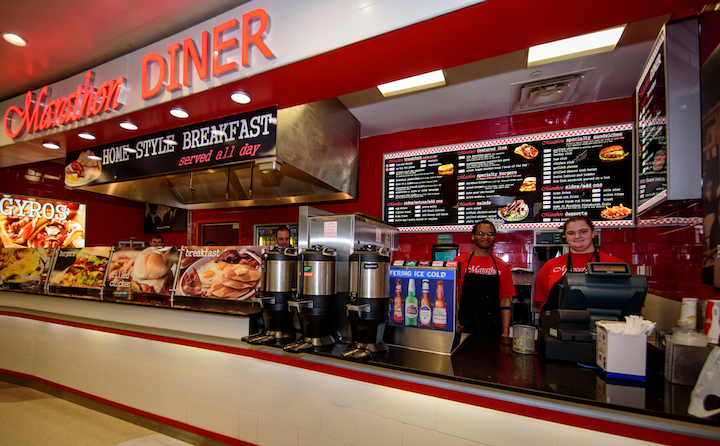 Drew Janis has operated dining concessions at Pittsburgh International Airport since it opened in 1992. The new Marathon Diner pays homage to Marathon Restaurant, an establishment owned by his grandfather and great-uncle in downtown Pittsburgh’s New Diamond Market building during the 1930s. Marathon Diner’s walls are adorned with historical images of the original restaurant and proprietors Papou Tom and Uncle Pete.

Janis celebrates his Greek heritage with featured items like the Marathon Gyro, Greek Burger, Greek Lemon Chicken Soup made in-house from a traditional family recipe and rice pudding. Guests are invited to “make it Marathon Pittsburgh Style” with the addition of coleslaw and French fries to any sandwich.

Breakfast is offered all day with favorites like the ham and cheese omelet joining the “My Big Fat Greek Omelet” made with feta cheese, onions and tzatziki sauce.

Janis sources meat, bread and produce from the same local purveyors that he has used during his 25 years at the airport to ensure the same quality and consistency for loyal patrons.